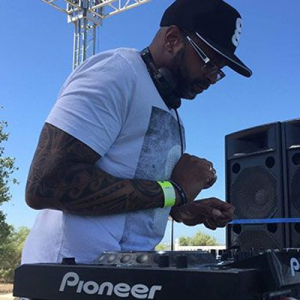 Mark XTC (Xtra Tuff Cutta) started his DJ-ing career at the tender age of 15 playing in places such as Sequins (Blackpool), Fantazia, Mythology and The legendary Hacienda, where in the late 80’s he won the North West DMC DJ Championships.

He then started producing his own music with his DJ group “The Mix Factory” (of Sunset 102fm) where his mix of the Mix Factory track “Take Me Away” reached number 41 in the UK singles chart and also gained success in the American charts. As well as producing music with the Mix Factory he teamed up with Manchester DJ legend Jonny J to create “The Family Foundation” with MC Shine and Manchester vocalist supreme Rachel McFarlane, they went on to create dance floor smashes express yourself, one blood, someday and of course 10 snide E, DJ’ing all over the world playing house music, hip hop and Jungle/ drum & bass in Malia (Crete), Ibiza, USA, Brussels and across Europe for some awesome nights and venues such as Helter Skelter, Dreamscape, The Hacienda, PSV (lighthouse), The Banshee, Sequins, The Eclipse/ The Edge, Club Kinetic, Pure X and Fantazia to name a few. Mark was also helping to spread the sound of music in the northwest by managing both Spin Inn and Eastern Bloc record shops in the early to mid 1990’s to the beginning of the millennium.

This is when “DA INTALEX” was born. Two guys doing what they loved, producing and spinning Drum and Bass all around the world. DA INTALEX presented a Friday and Monday night drum and bass show on Kiss 102, which changed to Galaxy 102 from 1993-2000. DA INTALEX founded Intalex Recordings with tunes being brought out constantly, such as “I Like It Remix”. “New Dawn” was released on Jump Up Records and also “What You Gonna Do” on Flex, which has gone down in history as one of the “all-time top ten drum and bass tunes”.

Sadly, DA INTALEX went their separate ways but Mark signed to Dread Recordings/Penny Black Records with DJ Ray Keith releasing music such as the “Come On E.P” which gained mark interest from the mighty Dillinja himself who then signed mark to Valve/Beatz Recordings and released “Keys” and “Roll Dem Beatz”, as well as most recently the huge summer drum and bass anthem “Take me away 2019” with Simon Exile. Mark has also released tunes on many other labels including Moving Shadow, Integral, Hard Leaders, Penny Black and Dread, FFRR, Warner Bros, PWL.

Mark is currently a full time lecturer at The Manchester College teaching DJ technology and Audio Technology/Midi, he works with children and adults from all walks of life sharing his passion for music with them. His dj-ing skills also help keep the Manchester House/Jungle/dnb/oldskool/rave/hiphop scenes alive with him being a regular DJ on OSN Radio every Sunday 7pm – 10pm and Kool London Tuesdays 7-9pm as well asat such established nights/ festivals as Glastonbury, Beautiful Days festival, Moovin Festival, Tranzmission, Parklife, Afterlife, Warehouse Project, Fabric Live, Bowlers Mcr, Metropolis, Slip Back in time Ibiza,Unity in the Sun Corfu and many other. Although Mark is known for his Hacienda classic house/ rave anthems sets, his jungle/ Drum & Bass sets are definitely ones not to miss!