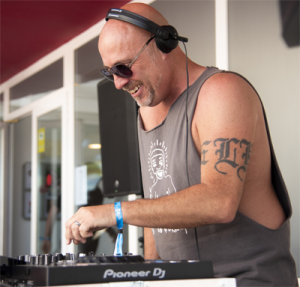 It all started back in 1988, when Mark Archer cut his teeth with Rhythm Mode D then moving on to form Bizarre Inc. in 1989 Although, he didn’t stick around long with the band, Archer received massive critical acclaim – and a few chart placings – for his second project, Nexus 21. It was while Nexus 21 were dabbling with some of the harder Belgian sounds around at the time, that Network Records owner Neil Rushton suggested the formation of a second act, so that some of this hardcore dance could be unleashed… Altern8 were born!

Altern 8 were a joyous mix of some rather eclectic influences. It sounded so simple and fun and yet the music was deceptively complex. Altern 8 went interstellar with a bunch of hit singles and the album Full-On Mask Hysteria, which hit number 10 in the charts. For a while the unlikely lads from Stafford were jetting around the globe with the likes of Moby, as Altern 8 captured the imaginations of ravers everywhere.

Eventually, the house lights came up on Altern 8 and Archer and Peat went their separate ways. Archer then emerged from the hardcore scene with SloMoshun, an act he formed with Danny Taurus. Bells of New York became compilation mainstays and Archer’s prowess at the production desk once again came to the fore with this more refined take on electronic music. Archer then followed up SloMoshun with solo projects Trackman, Xen Mantra and DJ Nex, which rooted our man right back to the underground that he loved so much, as he started to ply his trade as a DJ; something he started to enjoy just as much as making music. The man has been busy ever since.

The past 30 years has seen Archer firmly established as a UK dance music legend. His book The Man Behind The Mask was released in 2016 with a host of famous contributors including Moby, the man Archer toured Brazil with back in the day. The book was a chance for Archer to let that famous dust mask drop, thus revealing the man beneath. The book was warmly received, described by one reviewer as one of the best autobiographies he’d read that year.

Today, Archer can still be seen in that famous luminous mask as the resurrected Altern 8, although the name Mark Archer pulls crowds just as big, as seen in some massive performances at festivals such as Glastonbury, Bestival and EDC in Vegas amongst countless others. Archer is also a resident DJ at The Acid Experiment, Field ManeuversFestival and Bangface.

Bizarre Inc., Nexus 21, Altern 8, Trackman,SloMoshun, Xen Mantra, DJ Nex… Mark Archer has been making and spinning, the finest dance music for an incredible 30 years. Now, that is something to CELEBR8!