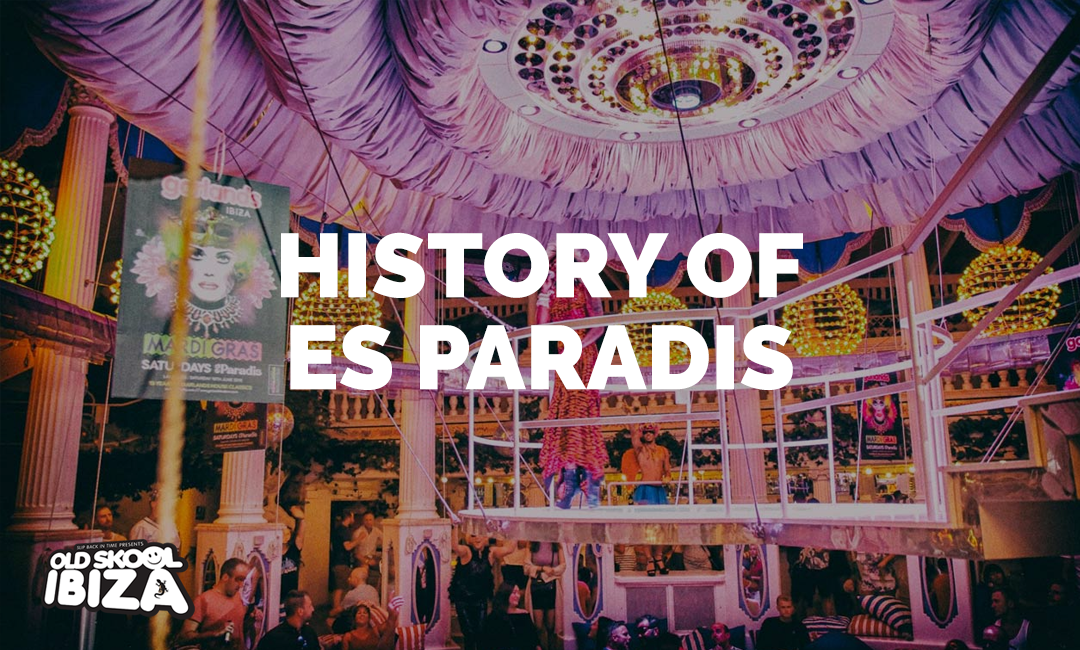 If you’ve ever gone to Ibiza, or even if you’ve only been curious about the place, then there’s a high chance you probably know the words “Es Paradis,” translated roughly to “Heaven on Earth.” Known for its lavish, vibrant parties with entertainment that is simply out of this world, Es Paradis has been an Ibiza mainstay for a long, long time.

A visit to Es Paradis is a must if you’re into partying. Take a step into the predominantly white, mock-Roman venue and colossal natural gardens, featuring a pyramid glass roof, and you’ll immediately feel like you’re in another world altogether, one that is a unique marriage of the traditional Mediterranean style and the futuristic quality of modern clubbing. With 10 bars, a boutique, 3 dance floors, 3 ambients, and 4 V.I.P. areas, you’ll never run out of things to do at Es Paradis.

Today, we’re going on a trip back in time to take a quick look at the history of one of Ibiza’s most popular clubbing destinations.

One of Ibiza’s “OG clubs,”- and it’s been holding its own even as hundreds of new ones popped up along the years- Es Paradis first came into existence all the way back in August 1975. The brainchild of collaborative pair artist Lluis Güell and club owner Pepe Aguirre, Es Paradis was a promising new club long before house music and raves rose to prominence. The second oldest club on the island, the idea behind Es Paradis’ creation was that Aguirre wanted to design “the most beautiful music box.” You can also note that Güell is the creator of another hugely popular Ibizan hotspot: Café del Mar.

When it was first opened, there wasn’t much ‘lively’ activity in the fishing village of San Antonio. It wasn’t long before Es Paradis gained a reputation and started to attract thousands of party-goers, however. The venue was incredibly unique, with open-air clubbing and lush, natural gardens.

In 1989-1990, the island saw new noise regulations that would affect clubs in the area. Es Paradis had to be enclosed to stay open but said regulations actually somehow worked in their favor because it led to the construction of the pyramid roof that Es Paradis is now known for. Designed to open in the daytime so that the greenery could survive, it’s thanks to the said pyramid that Es Paradis is visible no matter where you are in San Antonio!

Es Paradis has seen many tremendous DJs play throughout its years and it truly feels like it’s not losing steam, that it’ll just go on partying forever. It’s amazing that it is constantly evolving despite a few rough patches. They are always coming up with new nights, new parties, and in turn attracting younger people in the process. Another admirable thing about it is that it knows its roots, keeping its history close to its heart by running Old Skool nights and the like.

Definitely consider going to this historic club if you’re in the area!